It’s been three months since I (finally) shared my EPIC Dragon Warrior Tribute previsualization music video with the world via YouTube, and I’m humbled by the view count racking up since its release. Thank you! All ten of you! The reception, feedback, and praise I’ve received from you is a super confidence booster — so thanks, mom!

In all seriousness, it’s time to give you a glimpse of what went into the thinking behind this project. It’s a tribute video, after all, and all of its content is stolen from the game and put back together again in the form of a fan’s interpretation. What’s more, I wanted the viewer to recognize the things from the game and say “wow! It’s so true to the game!”

Did you play the game, then watch my tribute video, and carefully compare the two? I mean really scrutinize this video shot-for-shot to look at everything? Anybody? Probably not, because who cares to make time for that shit? So let me show you a few things you might have missed.

In the opening scene, our hero, the descendant of Erdrick, is walking along a jagged and colorful landscape. Did you notice the video’s landscape is to the scale of the original 8-bit source, but in three dimensions? 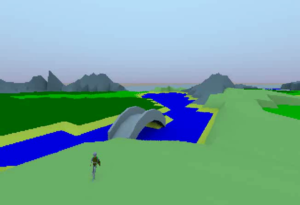 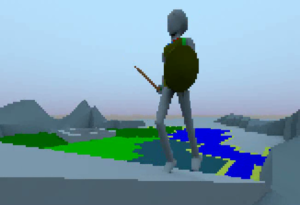 In this terribly pixelated shot of my video, we can see what looks like a familiar place in Alefgard, and though there aren’t any Green Dragons where our hero is walking, they can be found in the swamp just south of him.

I didn’t bother adding color to the model yet, because I didn’t get to it in time. I had a deadline, ya know! Plus, who the hell is actually watching this? Anyway, how about I do it now for ya in Microsoft Paint.

I could keep going, but I’ll let you (not care) to discover the rest! I will say that I really only changed a few things from the original game in my tribute, such as the location of the swamp where you find Erdrick’s Token, our hero not wearing his helmet in the beginning (but that’s because I forgot!), no cape or helmet tassel, and green dragons don’t grow into red ones. You also can’t be disarmed in the game. That’s about it.

How about I finish this post off with the best “easter egg” in my video yet: 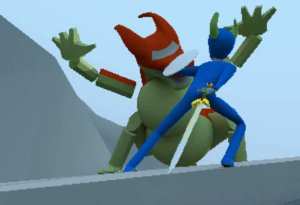 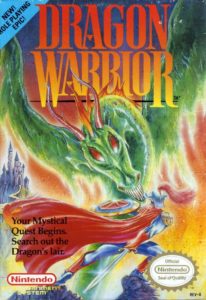 Look at that – it is the same thing you see on the game’s box art! The scenes flowed so naturally that I bet you didn’t even notice I slipped that easter egg in there. Because you didn’t even watch my video, that’s why.